Septura brings together London’s leading players to redefine brass chamber music through the uniquely expressive sound of the brass septet. Septura is currently the brass ensemble-in-residence at the Royal Academy of Music in London, and its members hold principal positions in some of the top orchestras in the world, including London Symphony, Philharmonia, Royal Philharmonic, BBC Symphony, and more. By creating a canon of transcriptions, arrangements, and new commissions for this brand-new classical configuration, Septura aims to recast the brass ensemble as a serious artistic medium.

We got the chance to talk with Septura’s two artistic directors, Simon Cox and Matthew Knight, on their latest Naxos release, the sixth volume in their ‘Music for Brass Septet’ series. 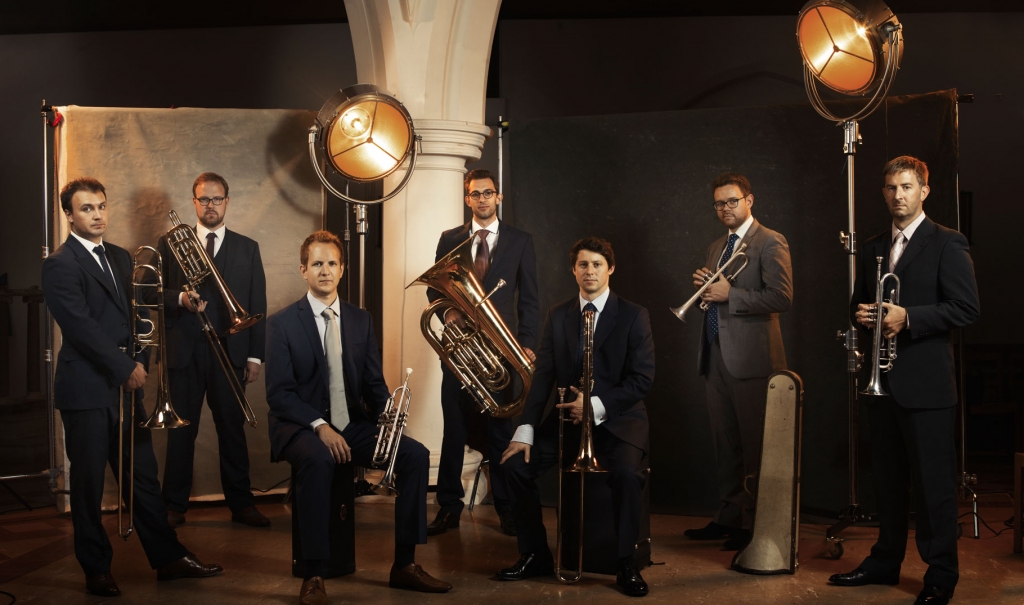 How did Septura originate, and what was the inspiration behind the name?

Simon: “Around eight years ago, I was working in Finland as a member of the Helsinki Philharmonic. Whilst there, I gradually became frustrated at the lack of musical involvement for brass in the orchestral repertoire (we have a lot of rests to count!) so I started to work on ideas for a new brass ensemble. I settled on the idea of the brass septet (three trumpets, three trombones, tuba – the same instrumentation as an orchestral brass section) because it has an incredibly expressive sound. Septura is essentially a made-up word based on ‘septet’, although we have since found out that it means ‘something which is about to envelope’ – given the gloriously powerful sound of the brass septet, this seems quite appropriate to us!”

What is it like working as the brass ensemble-in-residence at the prestigious Royal Academy of Music?

Matthew: “Lots of us studied at the Academy, and we performed the very first Septura concert there, so it’s a real privilege to be resident there now. Simon and I teach a brass chamber music course, covering everything from arranging for brass to performing chamber music, and we also perform side-by-side projects with Septura members playing alongside Academy students. It’s an incredibly rewarding thing to pass on everything that we’ve learnt from this unique Septura project to a new generation of brass players.”

In addition to performing with Septura, your musicians also play for internationally-renowned orchestras such as London Symphony, Philharmonia Orchestra, and the Royal Philharmonic. What kinds of benefits and challenges does this bring to the development of Septura?

Simon: “We’re very lucky to have some of the best brass musicians in the UK as our members. All of the experience they have gained working with these top orchestras (not to mention world-class conductors) contributes to the musical development of the group, and allows us to constantly strive for new musical heights in our recordings and concerts. The orchestras are of course very busy, so scheduling rehearsals can be a challenge. To help with this, we have ten members covering the seven parts, and the players’ sight-reading skills mean we can work very efficiently.” 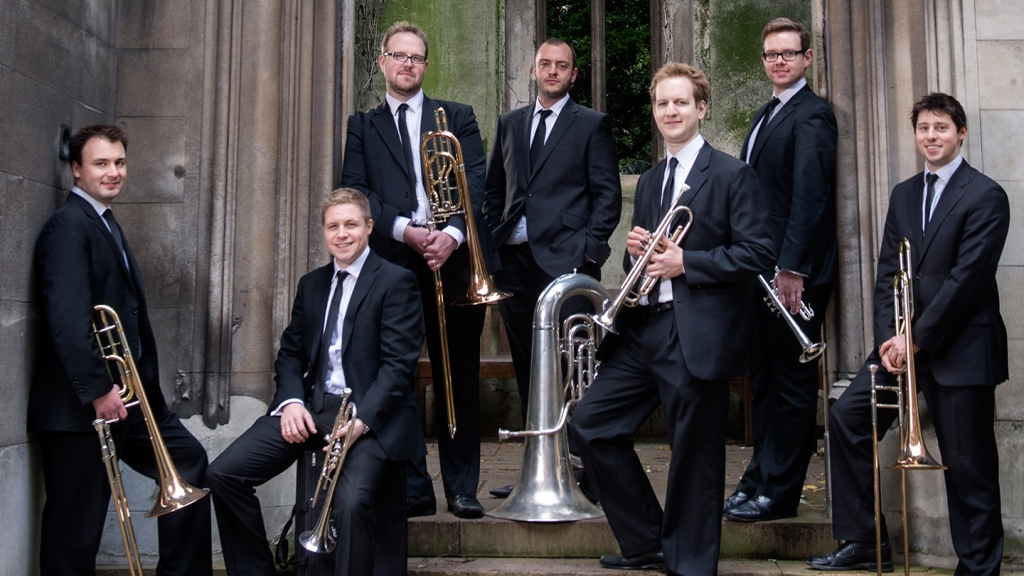 This release is the 6th edition in a series of 10 discs for Naxos Records. Could you tell us a little more about the background and inspiration for this series?

Matthew: “The brass septet is a brand-new medium for classical chamber music, so when we started out, we had a little problem: we had absolutely no repertoire. Simon and I started arranging for the septet, and the Naxos series was a massive catalyst for this. Each recording focuses on a particular period, genre, and group of composers, and through this we are building up a ‘counter-factual’ history of brass chamber music – imagining that the great composers of the past had actually written original music for brass. Now that we are on to the 6th release, we have built up quite a substantial repertoire, stretching over 5 centuries of music history. But we’re nowhere near finished yet – we have plans for many more recordings, and we’re constantly adding new arrangements, and also now beginning to commission original music by some of the up and coming composers of today.”

In the liner notes, you mention that this 6th edition is “something of a homecoming for Septura.” In paying homage to England’s rich classical history, how did you decide to feature these works from Elgar, Finzi, Walton, and Parry?

Simon: “We had already decided that this disc would focus on English music of the 20th Century, but the golden rule of choosing repertoire to arrange for Septura is that it must sound like an original work when performed by brass. This means we’ve been very selective about what types of music we arrange, avoiding pieces which contain tricky musical figurations and a breadth of colours that seem beyond the scope of the septet, often resulting in a focus on choral or piano music. As we’ve progressed through our Music for Brass Septet series of recordings for Naxos however, our horizons have broadened as we have developed as arrangers and players, and pieces that once seemed out of reach have become realistic possibilities. With this in mind, string orchestra repertoire had become an option, and of course the 20th Century was something of a golden age for English string music. This led us to the works by Elgar, Finzi and Walton, and we couldn’t resist adding a couple of choral pieces by Parry and Finzi to the mix as well.” 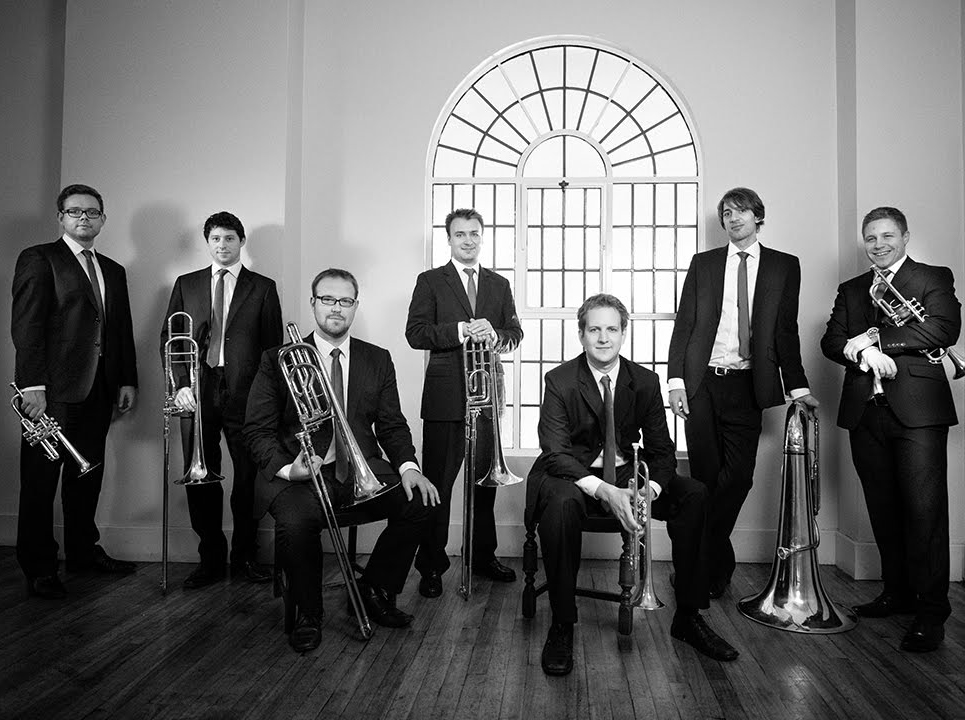 Thank you, Simon and Matthew! It was fascinating learning more about the Septura brass ensemble, from the way Septura started, how you create your repertoire, and the exciting 10-disc series you are releasing for Naxos. Stay tuned for more from this groundbreaking brass ensemble, and sign up for our email newsletter for more interviews, blogs, new releases, playlists, and more!